Jody Offstein, President of Furniture Galleries Carpet One, ran The Army Ten Miler in Washington, DC on Sunday, October 10th. Jody, his father Alan Offstein (69) and mother Patti Offstein (67) were among the 35,000 participants to complete the race which started and finished at the Pentagon, flowed through Arlington National Cemetery, Lincoln Memorial, The State Department and the Watergate Hotel. 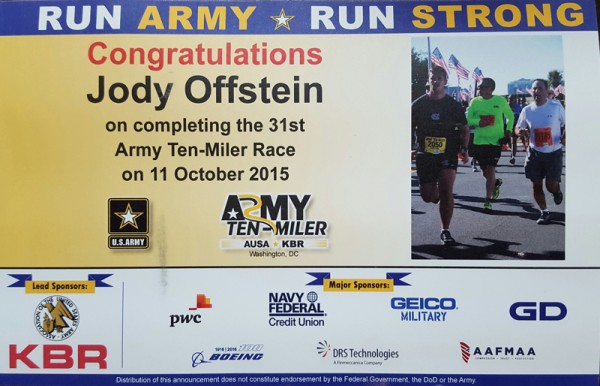 Prior to the race, the Offstein family asked that private contributions be made directly to the Building for America's Bravest program.  As of today, the store has collected over $2000 in contributions from their customers!!

Jody is a veteran who graduated from the United States Military Academy class of 1996 and served for 5 years as a Military Police officer stationed at Fort Carson, Colorado.  He has also been deployed to Bosnia in support of peacekeeping efforts during Operation Enduring Freedom for 7 months.

Thank you for your service Jody, and for your support of Building for America's Bravest!